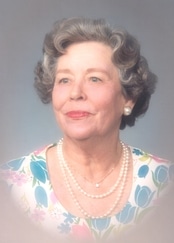 Mrs. Osborn was very well known in Oak Ridge and Knoxville for her involvement in the arts.  She was an actress, writer, composer, and lyricist. She appeared on stage in The Great Sebastians, The Music Man, The Miracle Worker, Auntie Mame, Harvey, and My Fair Lady and many others.  She composed the music and wrote the lyrics for several musicals including Horse-O-Rama, Flapperama, and Half-Baked Alaska.  She was the author-composer-songwriter of another “smash hit” musical, Babette.

In celebration of Oak Ridge’s 25th Anniversary, Mrs. Osborn wrote the music and lyrics for A Thousand Suns, a musical about the “Secret City”, its people, and the development of the Atomic Bomb, which ended World War II.   The show was so popular that it was performed at the Oak Ridge football stadium. Vinyl records were made of the 15 songs she composed.  Some of the music titles were White Lightnin, We’re Safe Behind Gates, Where Are You From Mr Oak Ridger, and the title song, A Thousand Suns.

For her years of service to the Oak Ridge Playhouse, Mrs. Osborn was presented with a Lifetime Achievement Award in 2003.

Betty Clayton Osborn attended George Washington University, and then transferred to the University of New Mexico, where she met her future husband, Wilton.  They were married at the beginning of World War II, October 9, 1941 in Washington, D.C.

She was a member of Colonial Dames, Daughters of the American Revolution, The Strother Society, The Oak Ridge Music Association, and St. Stevens Episcopal Church.  She loved her friends in the Philosophical Group, Monday Thing, and her years with the Bridge Club.  She asked that a special thank you be sent to all her wonderful friends and family, many of whom wrote, called and reached out to her in so many ways throughout her life and after she moved to Overland Park, KS in February, 2008.

Her memorial will read, “A Thousand Suns” – You lit up our lives.

A family service will be held at her grave site in the Oak Ridge Memorial Park with a reception for Mrs. Osborn’s many friends in Oak Ridge to follow. Details and date are still to be determined.