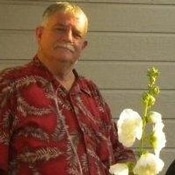 Brad Bartholow, 63 of Greenwood, MO left this world on October 21, 2009.  He passed away at the Kansas City VA Medical Center following a long fight with COPD.

Wayne Bradley "Brad" was born on October 8, 1946 in Dallas, Texas.  He was the first son to Robert and Oleta Bartholow.  His family was large with 3 brothers – Perry, Richard and David and a sister Tracy.  He grew up in Ft. Worth, Texas. He fondly talked about the family trips to the Brazos River.  He graduated from Paschel High School in 1964.

He joined the Army, went to Officer Candidate School and became a Military Police Officer.  He was stationed at Ft. Bliss in El Paso, Texas. Once, still at the age of 20 as a duty officer, and on patrol, his ID was checked and he was asked to leave the bar. The next day a baby rattle was left on his desk.   He went to Vietnam and served as a Military Police Officer in Long Bein.  He was awarded a Bronze Star.

When Brad returned from Vietnam, he married Cathy Fischer on June 7, 1969.  Being the joker he was, after the ceremony when they entered the chapel to take wedding pictures, he stopped in the middle of the aisle and said “Lord, What have I done? “  He became a loving husband for 40 years.

While Brad was attending the University of Texas he started working part time for Tony Lama Boot Company.  He was asked if he was one of those "college radicals" during an interview with Mr. Lama.  Brad graduated from the University of Texas of El Paso with a degree in Business.  Upon graduation, Brad became a salesman with Tony Lama Boot Company and moved to the Kansas City Area.  He traveled the states of Missouri, Kansas and Illinois.  He was also served as the President of the Midwest Western Market.

After leaving the western industry in 1997, Brad started selling over the road trucks.

Brad was the dad to two daughters Renee and Jennifer. He was a loving father.  He supported their achievements in school and activities.  He attended every concert Renee ever played in with Youth Symphony of Kansas City, the Independence Orchestra and at Lees Summit High School.  He also attended ballets to watch Jennifer dance with the Kansas City Ballet, Ballet Iowa, UMKC and Omaha Community Theater.  For a Texas cowboy at heart, he learned to enjoy the classical world.  He could even hum Cannon in D and parts of the Nutcracker by memory.

Brad touched many people in his life.  He was an honest, sincere and caring person.  He was also known for his sense of humor and always optimistic personality.

A Military Service will be held at 11 AM on October 30, 2009 at the Missouri State Veterans Cemetery, 201009 Business Highway 13, Higginsville, MO.   In lieu of flowers, one of Brad’s final wishes was to set up a college fund for his grand daughter – Sage Arabella Meade.  If you would like to do this, please send to the Bank of the West, 100 SW 150th Highway, Lee’s Summit, MO  64082.  Attention Barbara Benson. You could also make a donation to your favorite charity in Brad’s name.

Brad’s See Ya Party will be October 30, 2009 between 6:30-9:00pm.  Please stop by and say hello at the VFW Post 5789 Lodge, 329 South Douglas, Lee’s Summit, MO 64082.   His party will be a time to remember all of his favorite sayings and the funny things he did that made him the special person he was.  If you want to write down, any thing special or funny, we will be making a book.  Hope to see you on Friday to share the joy of his new life with the Lord.