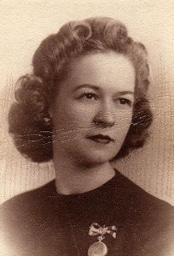 Caren Crouch Trabue, 91, of Overland Park, KS passed away peacefully August 3, 2008 at the Forum. She was born in Temple, TX on December 14, 1916 and grew up in Dallas. She graduated from Dallas High School and received her Bachelor’s Degree in Fashion Design from Texas Women’s College. She worked at Bergdorf Goodman in New York City prior to her marriage of 52 years to the late Col. William Trabue. Through their extensive travels in the Far East and Europe she continued her education, earning a French Cooking Degree from the Cordon Blue in Paris, France and a Japanese Cooking degree in Tokyo, Japan. She also graduated a Professor of the Art of Flour Arrangement from the Ickiyo School in Tokyo. Caren is survived by her sister, Betty C. Carter of Carrollton, TX; her son, William Courtney and Jennet Trabue of Augusta, GA; and her two daughters, Joan T. and John Sight of Overland Park, KS and Cathy T. and Peter Kohl of Belton, MO; her grandchildren, Wendy Sight Brown and husband Brad, Jeff Sight and wife Jody; and great grandchildren, Jakob and Jordan Sight. Caren was a kind and generous person who always cared for others more than she did for herself. She will be dearly missed by all who knew and loved her. Memorial donations may be made in Caren’s memory to a charity of your choice.