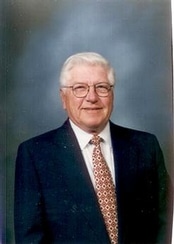 Charles Howard Lumpp, Jr., 80 of Columbia, died Saturday, April 2, 2011 at Boone Hospital.  Cremation has taken place and burial of his cremains will be held later at Skyline Memorial Park in Monee, IL.  He was born August 13, 1930 in Chicago, IL to the late Robert and Harriet (Ligman) Lumpp.  Charles served in the United States Air Force for four years and was a member of the American Legion Post 1198 in Park Forest, IL.  He graduated from Illinois Institute of Technology with a Metallurgical Engineering Degree in 1959.  Charles began his professional career working for the U.S. Foundry Corporation and then spent seventeen years employed by Remington Arms/Dessa Corporation in Park Forest, IL.  He accepted a position with McGraw Edison in Columbia in 1977 which later became Toastmaster Inc. until his retirement in 1995.  Charles is survived by his loving wife Mary Jo Lumpp, two sons, Robert Lumpp and Paul Lumpp, three granddaughters, Melissa Spurtock, Amy Howard and Jessica Tipman as well as a great-granddaughter, Alexis Howard.  He is also preceded in death by his two brothers, Ray and Norman.