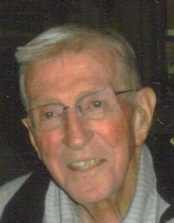 Charles “Chuck” Martin Stock, 76, of Pembroke Pines, Florida, formerly of Joplin and California, Missouri, passed away on August 22, 2009. Chuck was born in McKeesport, Pennsylvania, on October 26, 1932, to Charles and Margaret Stock.

Chuck graduated from McKeesport High School in 1950 and served three years in the 82nd Airborne Division of the United States Army. He completed his military career as a sergeant and served as a paratrooper instructor. He graduated from Mount Union College in Alliance, Ohio, in 1957.

Chuck was employed as a geologist for Eagle-Picher, New Jersey Zinc Company, and the Missouri Department of Transportation. He worked in Wisconsin, Oklahoma and Missouri. After working for MoDOT in Jefferson City, he retired from the Joplin district in 1991. One of his favorite pastimes was travelling with his bride of 49 years to all 48 contiguous states. He was a great practical joker who loved gardening, playing cards, billiards, and spinning tall tales. He was a member of the Elks Lodge, the American Legion, and the VFW.

Visitation will be from 4 – 6 pm Tuesday, August 25, at the Bowlin-Cantriel Funeral Home in California, Missouri. A second visitation will be held from 4 – 6 pm on Wednesday at Parker Mortuary in Joplin, MO. Graveside services with military honors will be held at 10 am, Thursday, at Osborne Memorial Cemetery in Joplin, MO.  Memorials may be made to the American Cancer Society.