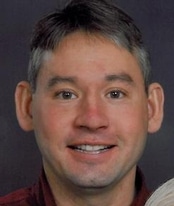 Services will be held Monday, July 20th at Saint Francis Xavier Church, 1001 E. 52nd Street with a visitation at 10 am and memorial mass at 11 am. In lieu of flowers, donations may be made to Kansas City Free Health Clinic, 3515 Broadway, KCMO 64111.

Charlie lived his entire life in Roeland Park. He was an active member of Hope, a support group for gay and lesbian Catholics. He worked at Continental Airlines for eleven years and considered some of his co-workers as his second family. He is remembered for being hard working, loyal and kind to all. Gringo is remembered by all for his boundless generosity. During his mom’s long struggle with cancer, he lovingly cared for her. His devotion to her was an inspiration to others. He was by her bedside when she died May 1. They were very close. As an uncle, god-father, and friend he had no equal. He shared of his time and resources with all. He felt best in the company of loved ones, especially when he could help make others happy. Charlie had a special gift for serving. He thrived on taking care of visitors to his house. To his family and friends, Charlie was an excellent listener and counselor.

Because of his job’s benefits, Charlie traveled the world. He had been to Latin America, Europe, Australia and Asia and he was especially fond of the ocean.

Perhaps the most universal memory of Charlie was his smile. He lit up the room when he entered. He had a quick wit and was an excellent dancer.

Charlie will be remembered for his dedication to his relationships. His ambitions involved others’ happiness. He will be greatly missed. He embodied Jesus command to love others.