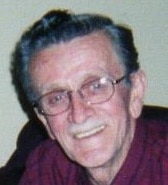 David E. Anderson, 76, Kansas City, MO passed away January 8, 2009 at his home, following a battle with cancer. Private services will be held at Leavenworth National Cemetery in Leavenworth, KS. Mr. Anderson was born on July 26, 1932 in Marquette, MI. He graduated high school in Negaunee, MI. Following graduation he joined the Army and served in Korea. David married Jan (Rasmussen) Anderson on August 29, 1952 in Fort Riley, KS. They were blessed with four children, David, Debra, Jan Marie, and Mary Beth. After his time in the service David worked as a contractor and enjoyed woodworking, fishing, reading, spending time with family and friends and cooking gourmet meals. David was preceded in death by his father, Thomas E. Anderson Sr. and step-mother Helen Anderson; mother, Margaret (Blades) LeMaire and step-father, Paul LeMaire; two sisters, Mary Messenger and Judith McNaney. He is survived by his wife Jan, children, David Thomas Anderson of Salem, OR, Debra Lynn Osborn (Larry) of Kansas City, MO, Jan Marie LaGrone (Cary) of Gladstone, MO and Mary Beth Anderson of Kansas City, MO; grandchildren, Jamie, John, Matthew, Janelle, Erika, Cary, Brian, Kyle, Ashley, and Alan; and great grandchildren, Blake, Brina, Ethan, and Jordan. Also surviving David is a brother Thomas E. Anderson (Alice) of Negaunee, MI; two half brothers, Melvin and Douglas and three half sisters, Christine, Marilyn, and Marsha; and a host of nieces and nephews. David was a member of the Roanridge Church of Christ. He will be remembered for love of his family and his compassion for everyone. He was known for putting others before himself, in everything he did. We loved him dearly and he will be missed by all, and we look forward to spending time with him in everlasting life. Flowers may be delivered to Heartland Cremation and Burial Society 6113 Blue Ridge Blvd, Raytown, MO 64133 before 11 AM on Monday, January 12, 2009. Memorial contributions may be made to Kendallwood Hospice, (816) 587-1000.