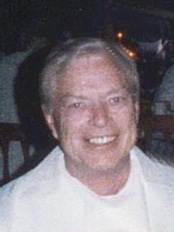 Donald Eric Johnson of Overland Park, KS, passed away on Saturday, Sept. 13, 2009. Born on March 19, 1929, to Vera and Eric Johnson of Kansas City, Don grew up in the area and attended KU at Lawrence, receiving his bachelor’s degree and then a master’s in Business Administration. He then joined the U.S. Navy, was stationed in Hawaii and rose to the rank of Lieutenant. After leaving the service, he became a top salesman for Caterpillar Tractors, living and working in Argentina where he took great advantage of the opportunity to travel extensively throughout South America. Returning to the States, he became the manager of a popular steakhouse, then married June Hegge, owner of The Village Clothesline in Wichita, KS. He joined her business and together they expanded the operation to four retail stores, eventually retiring and returning to their roots, Kansas City. Over the course of their marriage, they greatly enjoyed traveling throughout all fifty U.S. states and every province in Canada. Those exploits, and Don’s philosophy and ponderings about life, current events and the country he dearly loved — were chronicled in two published books and 75 "Dear Wally" e-mails, addressed to his brother who predeceased him by three days. Don is survived by his wife, June, and two daughters, Tamara Johnson-Andrews and Lani Rezena Dandurand, Lani’s husband Jim Dandurand and their three sons, Nicholas, Jonathan & Stephen. Services will be held at 12:30 PM this Friday Sept. 18, 2009 at Heartland Cremation & Burial Society, 6113 Blue Ridge Blvd, Raytown, MO. Burial will follow immediately at Missouri Veterans Cemetery in Higginsville, MO. Donations may be sent to the Veterans Hospital, 4801 E. Linwood Blvd., Kansas City, MO 64128 or to Kansas City Hospice, 12000 Wornall Rd, Kansas City, MO 64145.