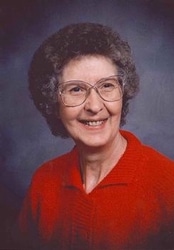 After graduation from high school, Elsie went to work at Lincoln Manor Hotel, where she first met Robert Proulx.  She moved to Omaha to work at JC Penney’s as the cashier in the cafe. She became re-acquainted with Robert Proulx and they were married June 26,1953 at Boys Town, NE. To this union two children were born: Lauri and Robert, Jr.  Elsie also raised her stepdaughter, Barbara. Elsie and Bob owned and managed the G.I. Steak House in Emporia, KS for several years before moving to Ottawa, KS in the early 60’s.  Elsie worked as office manager at the COF Training Services from 1971 to 2000.  Elsie moved to John Knox Village in Lee’s Summit, MO in 2003.

Memorial contributions: In lieu of flowers family suggests contributions to the animal shelter of your choice.