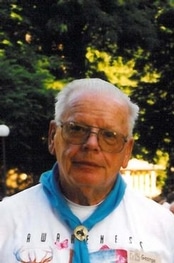 George L. Scheil, 86, passed away on Thursday, June 10, 2010.  He was born February 22, 1924 to Richard & Erna Scheil in Wakenda, Missouri.  He is survived by Alice, his wife of 65 years; sons George W. and Paul R. (Sara); 2 grandchildren, Betsy & Luke.  He married Alice in 1945.  He graduated from East High School in 1940 and became employed by Kansas City Southern Railway in 1941 where he continued working until retiring in 1984 as the Director of Labor Relations and Personnel.  He served in the U.S. Navy from 1942 – 1946, he was stationed in Australia and Papua, New Guinea where he served for 27 months.  He was baptized at Central Christian Church and later moved to Raytown Christian Church where he served as Deacon and Chairman of the Property Dept.  He was active in the Boy Scouts Troop 285 and the Tribe of the Mic-O-Say where his sons George & Paul were also members and attained the rank of Eagle Scout.  George was interested in photography.  He and Alice enjoyed 3 trips to Europe where he took many photos. He was an ardent conservationist.  He and Alice became interested in nature & the outdoors, they both attended over 25 annual summits in the U.S. & Canada with the National Wildlife Federation.  They were Life Members of the National Wildlife Federation, Friends of Squaw Creek and the Kansas City Zoo as well as members of the Burrough’s Audubon Society.  They were active in bird watching, having many feeders in their yard. They moved their interests to the Squaw Creek National  Wildlife Refuge near Mound City and began service as volunteers in 1983, George was active in the formation of and served as President of the non-profit organization, Friends of Squaw Creek.  He was instrumental in obtaining funding to build the Educational Auditorium and his retirement as President coincided with its completion. It was then donated to the U.S. Dept. of Interior.  George’s wishes are that his ashes are to be spread in the area of the George L. Scheil Outdoor Classroom at Squaw Creek. In lieu of flowers memorial contributions may be made to Friends of Squaw Creek NWR, 401 W. 58th Terrace, Kansas City, MO  64113