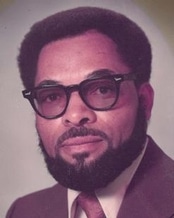 Gerald K. Bell was born October 13, 1928 in Chicago, IL to Andrew and Suel Hiram Bell, and passed away April 10, 2010. He was preceded in death by his parents and siblings, sisters-Louise, Helen, and Gloria Jean; brothers-Harry Bell, Arnold Bell, Morris Bell and Richard Bell; and a daughter Deborah Bell. On August 10, 1963, Gerald was united in matrimony to the love of his life Eleanor Holden. In earlier years Gerald was a very promising welterweight. His favorite past time was watching boxing on TV and going to the gym visiting “Bubbles Klice“ and other local boxers. Gerald was a very meticulous and hard working man, also a very devout Christian who believed in the bible teachings. He was the type of man who could find good in everyone. He retired in 1994 after working for General Motors almost 30 years. He received a beautiful plaque for never missing a day and always being on time. He was diagnosed with Alzheimer‘s in 1999. He went from a virtually healthy man to absolutely no recognition of anyone. Alzheimer’s is a disease that takes everything from you. He was from a large family in the Leeds District. Gerald is survived by his loyal loving and devoted wife of 47 years, a daughter Bethena Bell and 2 grandsons Marland and Mike; a stepson Ronald Holden (Pat), whom he practically raised; his special grandson Brandon Holden of Grandview, MO; a special granddaughter Rachael Berry of Long Beach, CA; other grandsons, Jeff Holden, Sean Holden (Judy),Chris Holden (Sheryl), Kansas City, MO; Ronald Holden II (Diane), Akron, OH; other siblings, Sister Margaret Nash, and brothers, Andrew Bell, JR., Charles Bell and Anthony Bell, grandchildren, other relatives and fiends including a very special friend and family confident, Krisandra Harrison. Gerald fought a valiant and painful fight for 10 years. Now he is in heaven with the Lord whom he loved so much. So in closing, I say sleep well my precious one. The dark days are over, the golden street of Heaven awaits you. A visitation will be Thursday, April 15, 2010 at 11:00 AM with funeral services to follow at 12:00 PM at Heartland Cremation & Burial Society, 6113 Blue Ridge Blvd, Raytown, MO.