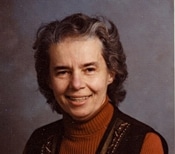 Grace W. Marshall, 83, formerly of Cascade, Iowa, died Thursday, February 28, 2008, at the home of her daughter in Kansas City, Missouri, where she has resided for the last five years. Cremation is planned with a memorial service to be held at Cascade Community Presbyterian Church in Cascade, Iowa, Saturday April 5.
Grace was born October 27, 1924, in Dubuque, Iowa, daughter of Charles M. and Wihelmina (Hanser) Hawkins. She graduated from East Cascade High School. She attended Business College and was employed by B & G Automotive in Dubuque where she lived many years before returning to Cascade.
She was a devoted mother to her three children. She is survived by her daughter Linda Orear and husband Barry of Kansas City, Missouri, her son Derril Marshall and wife Carol of Fremont, Nebraska, and her daughter Karen Reisner and husband Dennis of Fountain, Minnesota. Grace leaves behind four grandchildren and three great grandchildren.
Grace was preceded in death by her parents and her three siblings, her brother Edgar Hawkins, sister Birdena Ganfield and her brother Robert Hawkins all of Cascade.