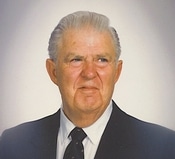 James “Bob” Granger, 81, Kansas City, MO passed away Thursday, July 3, 2008 at the Missouri Veterans Center in Cameron, MO. A memorial service will be held Saturday, July 12th at 2:00 at The Park Hill Christian Church. Mr. Granger was born December 20, 1926 in Kansas City, MO to Hazel Marie and James O. Who preceded him in death. Bob spent most of his young life in Nixa, MO and graduated from high school in Kansas City, attended Park College, and UMKC. Bob was united in Marriage with Bonnie Marie King on May 25, 1945 in Portland Oregon, She survives, of the home. Bob and Bonnie celebrated 63 years together. To this union they had 2 daughters. Bob served as a medic in the Navy during WWII, and in the Air Force during the Korean Conflict. He was a member of Park Hill Christian Church, and a member of the masons and the Shrine. He retired in 1986 from the Burlington Northern Railroad where he was Yardmaster, and Vice General Chairmen of the Railroad Yardmasters of America. Bob will be remembered for his devotion to his family, and sense of humor. He enjoyed golf, and water sports at his vacation homes at the Lake of the Ozarks, and Table Rock. Bob liked to vacation, particularly enjoying travels to Spain, and Africa. He is survived by: his wife Bonnie; daughter Amber Granger and her daughters, Chloe and Sophie; daughter, Deborah Butcher and her husband Michael of the Parkville area. He has two grandsons: Colby Butcher of Sarasota, Florida, and Scott Butcher who lives in Platte City with wife Tanya and Sons Colton and Trey. The entire family loved Bob, and will have great memories of the good times they shared. The family will receive guests, after the service, during a reception at the church, located at 6601 NW 72nd St., Kansas City, MO 64151. In lieu of flowers, the family requests contributions to a charity of your choice.