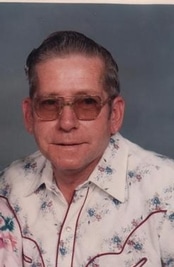 James W. Beach, 83, went to be with the Lord on February 12, 2011 after a long illness. He was a WorldWar II veteran, having served in the Navy. He had worked 38 years as a carman/Welder for the Santa Fe railroad before retiring.  He and his wife were members of the Willard Avenue Baptist Church, previously Rosedale Baptist Church. Prior to that, they were members of Ruby Avenue Baptist Church where Jim was active in the physical construction as well as the spiritual growth of the Church.  He is survived by his wife Helen Beach, daughter Kay Moyer of Tonganoxie, KS, Sons Jeffrey Beach, Kevin Beach, daughter Jennifer Lash and their families all of California. Sisters Ruth McMahon, Kansas and Irene Short, Nebraska, 7 grandkids, 8 great-grandkids, and several nieces and nephews. Cremation. A memorial service will be held 10 AM, Saturday, February 19, 2011 at Willard Avenue Baptist Church, 3205 Willard Ave., Kansas City, KS 66106, with burial at a later date at Chapel Hill Cemetery. In Lieu of flowers memorial donations may be made to Willard Avenue Baptist Church.