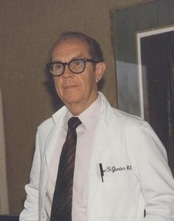 Joe Seth Gunter, 84, of Kansas died Thursday, Aug. 6, 2009, at his home in Leawood, Kan.  A memorial service will be held at 3 p.m. Thursday, Aug. 13, at St. Michael and All Angels Church. Interment will be at Columbia Cemetery.  Born June 15, 1925, in Dallas, he attended Sunset High School, Southern Methodist University and graduated from Southwestern Medical School in June 1951. He was a member of Phi Beta Pi fraternity, a member of Alpha Omega Alpha honorary society, a World War II U.S. Navy veteran, and a dedicated doctor.  Joe and Peggy were married on June 28, 1948. Professionally, Joe began his career in medicine in Springer, N.M., where he spent five years as a general practitioner before turning to a focus in urology. After completing his residency, he practiced in Rapid City, S.D., for three years before moving to St. Joseph, where he practiced urology for more than 30 years.  During his time in St. Joseph, he was instrumental in starting a workshop to train and employ the handicapped. After retiring from the practice of medicine, Joe moved first to Osage Beach, where he worked a great deal on his golf and tennis skills. He later moved to Lawrence, Kan., where he became a devoted University of Kansas Jayhawks fan and enjoyed serving as a volunteer for Habitat for Humanity. For the last 12 years, Joe lived in Johnson County, Kan., where he was an active member of the Episcopal Church and worked for more than six of his last years preparing meals for Johnson County Meals on Wheels.  Joe is survived by his wife, Peggy; his daughter, Sharon Lee, and her life partner, Jean Sax, of Columbia; his youngest son, Garth, and his wife, Dawna, of Shawnee, Kan.; and two grandchildren, Geena Renee and Joe Seth Gunter.  Joe was preceded in death by his eldest son, Seth Gunter.  In lieu of flowers, memorial donations should be sent to Special Olympics, (202) 824-0373, 1133 19th St. N.W., 12th floor, Washington, D.C., 20036-3604, or St. Michael and All Angels Church, 6630 Nall Ave., Mission, Kan., 66202.