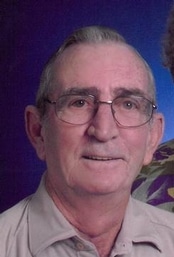 Joseph Bergeron, 77, of Kansas City, MO died at home on March 9th, 2011. Born and raised in Fall River MA, he joined the Navy after high school and served from 1951 to 1954 on the USS Fremont. He moved with his bride to Kansas City in 1957. Joe was an avid golfer. He was an active member of St. Catherine of Sienna where he had worked for fifteen years. He was a fourth degree Knight of O’Hara Council #4387 and a member of VFW Post #8100. He worked for EBE, Distillers and River Oaks Golf Course. Never officially retiring, Joe was a mechanical engineer for Arthur Bryant’s BBQ. Joe is survived by his loving wife, Jean, of 54 years, his sister Theresa Medeiros of Fall River, MA, his two daughters, Denise Turner (Dean) and Rachelle Vandiver (Jeffrey). His pride and joys were his 5 grandchildren and 9 great grandchildren along with numerous nieces and nephews. He was a loving husband, father, grandfather and a friend to many. He will be greatly missed. A visitation will be held at 9 AM and Mass following at 10:30 AM Friday March 18th at St Catherine of Sienna, 4101 E. 105th Terrace, KCMO. In lieu of flowers, donations can be made to Good Shepherd Hospice at 7611 State Line Road, KCMO 64114 (arr. Heartland Cremation & Burial Society 816-313-1677)