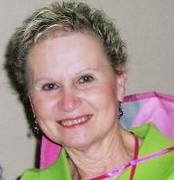 Linda Gail (Laffoon) Jones, 64, Lee’s Summit, MO passed away July 1, 2009. A Celebration of Linda’s life will be held 6PM, Wednesday, July 8, 2009 at Lee’s Summit United Methodist Church, 2nd and Douglas, Lee’s Summit, MO. A visitation will be held 5-6PM Wednesday prior to the memorial at the church. Family burial will be held at a later date. In lieu of flowers memorial contributions may be made to the Susan G. Komen Cancer Fund at Komen.org.
Linda was born March 31st, 1946 to Vernon & Margret Laffoon. She was preceded in death by her father, mother, brother and sister. She was very strong and courageous during her four year battle with cancer. She is survived by; husband of 44 years, Ed Jones; son & daughter in law, Darrell & Tammy Jones; daugher & son in law, Shelly & Scott Wright; four grandchildren, Mason, Evan, Collin & Sydney. We will all miss her and know she is in a better place without pain.

Linda was born in Independence and lived in the Kansas City area all her life. Her father was an avid fisherman so her family went to The Lake of the Ozarks a lot while she was growing up. They boated, fished and spent many family vacations there. As a young teenager, she started working in a beauty shop while attending East High School. She met her husband, Ed, when they were sixteen. They dated for four years, then married when she was nineteen years old. Linda worked for Business Mens Assurance Company for eight years. In February of 1972, they had their first child, Darrell. In 1978, her second child, Shelly, was born. She enjoyed parenting and was terrific at keeping everything going in the right direction. In 1987, she decided to return to work, but wanted to be available for the family, so she worked in the office of the R-7 Lee’s Summit School District. Linda worked for nineteen years and retired in 2006 from Campbell Junior High. During the last thirteen years she enjoyed going back to the Lake of the Ozarks with her family and many friends. Linda loved her grandchildren and wanted to do anything that involved them. Playing, babysitting, shopping with and for them. She also enjoyed relaxing on her screened-in-porch reading and watching the birds. Linda loved nature and all animals. 2005 was the beginning of her battle with cancer. She had about five different types of chemo treatments. Some of them were much worse than others, but she was a trooper throughout. Her strong will, determination and work ethic will be a great example for her children and grandchildren. We will all miss her greatly and know she will continue to watch over us from a heavenly place.