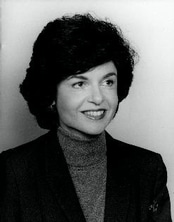 Linda was born in Jersey City, New Jersey, on April 26, 1940 to the late Pauline and Abraham Zackler. She attended New York University, earning a Bachelor of Arts degree, and then Stanford University where she received a Master of Arts degree in audiology. She later earned a Ph.D. from the University of Kansas in speech pathology and audiology. Her career as a speech therapist and college professor spanned more than 40 years.

Linda was passionate about her work—helping people with neurological disorders recover their ability to communicate and maximize their quality of life. She was a leading practitioner of speech-language pathology in the Kansas City area, having directed the hearing and speech departments at Menorah Medical Center and at Mid-America Rehabilitation Hospital. In 2000, she joined the faculty of Rockhurst University and, in 2005, was awarded tenure as Associate Professor in Communication Sciences and Disorders.

Linda took great pride in developing support groups for people with neurological disorders. She led in the creation of the Aphasia Conversation Group, the Parkinson’s Speech Group, and support groups for stroke survivors. She served on the Board of Counselors at St. Joseph Medical Center and the Board of Directors of the Swope Parkway Health Center. She was appointed to the Mayor’s Committee for Persons with Disabilities in Kansas City, Missouri, the Professional Advisory Board of the Parkinson’s Foundation of the Heartland, and the Professional Advisory Board of the Foundation for Voice and Swallowing Care. She also served as state representative for the National Aphasia Association and reviewer for the Academy of Neurologic Communication Disorders and Sciences.

Most important to Linda was her family: her husband of 45 years Mel, her son Marc, daughter and son-in-law Laura and Charles Mardiks, and her beloved granddaughters Madeline and Zoe Mardiks. Linda is also survived by her sister and brother-in-law Marsha and Joel Dowshen, sister-in-law Eleanor Levine, brother-in-law Barney Summers, nine nieces and nephews, and many, many loving friends and wonderful Brookside neighbors. She also leaves her cherished golden retriever Eli, who provided her so much joy.

Linda handled her disease and end of life with the same grace and dignity that characterized the rest of her life. Though her life was cut short, Linda was able to move through sadness to great peace and equanimity. In her final days, she was unburdened and full of wisdom and perspective. She focused on her blessings—her family, her close friends, all the people who cared about her, and her lifetime of work helping people recover from illness and injury. Linda’s life will be memorialized on Wednesday, December 23, at 2 p.m., at Congregation Beth Torah, 6100 W. 127th St., Overland Park, KS.

Linda’s family has established a fund in her memory at Rockhurst University to support professional development in speech-language pathology for students in financial need. Contributions may be sent to Rockhurst University, Office of University Advancement, 1100 Rockhurst Road, Kansas City, MO 64110, attn: Linda Z. Solomon, Ph.D. Memorial Award. To make a contribution by credit card, please visit www.rockhurst.edu/giving and select “give online.” One should specify that the gift is for the Linda Z. Solomon, Ph.D. Memorial Award.