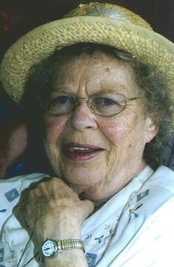 On July 4, 1927, God sent a firecracker into the world. Mary Francis Weaver Clements was born to Leo and Thelma (Eytchison) Weaver in Kansas City, MO. She grew to adulthood in Kansas City, KS, and attended schools in the area. She graduated from Wyandotte High School. By her choice of K-State, she turned her mother from a KU fan to a K- State fan. Francie, as she was called, majored in Spanish and graduated from K-State. In June of 1951, she married John H. Clements at Crown Point, Indiana. They were the parents of Patrick (Pat) and Dennis, both of Blue Springs, MO; and Paul, of Newcastle, WA. After living in Illinois and Indiana, family moved to Kansas City, MO, in 1960 and has remained in the area. Senora Clements was one of the Spanish teachers at Truman High School for many years. For her students, she brought not only the language, but also the culture of Spain alive. Seeing a former student of hers was always a delight to her and to the student as well. Fran was an avid traveler and reader. She especially enjoyed her trips to Spain and other countries in Europe. In 1993, at the age of 66, she bought an RV and took off on an Odyssey around the US. With Fran, you never knew where you would end up whether it was a ride, a trip, or a conversation. Her curiosity was contagious and would surprise you and stimulate you. Fran was preceded in death by her husband, John; her parents, Leo and Thelma; her sister, Nancy; and a nephew. She is survived by her sons: Pat, Dennis, and Paul; four granddaughters; one grandson; and one great granddaughter. Also surviving is her sister, Michelle Paulsen, of Blue Springs, MO. Her nephews and niece knew her as Aunt Sister, and she is survived by four nephews, one niece, two great- nephews, and two great-nieces. She is also survived by many friends and her church family at Chapel Hill Presbyterian Church. Visitation will be from 6-8 p.m., Tuesday, Sept. 15, at the Clubhouse at Lake Tapawingo. Services will be 10 a.m., Wed., Sept. 16, at Chapel Hill Presbyterian Church. A private inurnment will be in Onaga Cemetery, in Onaga, KS. Memorial donations may be sent in care of Chapel Hill Presbyterian Church, 3108 Westbound 40 Highway, Blue Springs, MO 64014 for the Christian Children’s Fund. Mom, Fran, GranFran, GG, Sis, Aunt Sister, Senora Clements, you will be missed. But you will have the best seat in the house on the Fourth of July.(arr. Heartland Cremation & Burial Society, 816-313-1677)