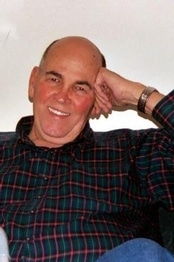 Robert (Bob) was born in Coffeyville, KS in 1936.  His parents were William L and Lela (McClure) Hensley.  He was proceeded in death by his parents and his siblings; Wilma Henry, Lilbern Hensley,  J E Hensley, Dean Hensley and Jo Ann Sumner.  Survived by his beloved wife of 52 years Barbara J Hensley of Garden City, KS, his daughters; Dee Harding  and husband Randy of Independence, MO, Donna Hensley of Overland Park, KS and Linda Taylor and husband Terrence of Garden City, KS,  a brother Ronald Hensley of Coffeyville, KS and four grandchildren; Derrick Quint, Ann Arbor, MI and his fiance Kathleen Chiles of Independence, MO, Miranda Taylor of Garden City, KS, and her fiance Tyler Unruh of Deerfield, KS of  Dillon Quint of Independence, MO and Ryan Harding of Shawnee, KS.  He chose to add Louise and Michael Simon to his family including their children Jeremy and Nicole Turner and their grandchildren Kallyn and Keller.

Robert graduated from Coffeyville Memorial High School in Coffeyville, KS in 1955.  He was married to Barbara J Roberts on August 1, 1957 in Miami, Oklahoma.  He worked for Graves/ANR as a driver for 26 years in Garden City, KS.  He then worked for several other trucking companies including Eves Trucking as a dispatcher prior to his retirement on December 31, 2001.

Since his retirement Bob enjoyed playing cards at the Finney County Senior Center on a daily basis and traveling especially to Branson, Missouri, baking and spending time with family and friends.  He enjoyed watching boxing and Nascar racing.  He had a special love for children and had many friends and beloved neices and nephews he was very close to.  In his younger days Bob enjoyed sports and riding dirt bikes.

Bob was a member of the First Baptist Church of Holcomb, KS.  He spent several weeks at the KU Medical Center Cardiac Care Unit battling heart disease.  He joined his lord and savior on Monday, October 26th at the amazing Kansas City Hospice and Palliative Care Center surrounded by his immediate family and pastor Jon Becker.  In lieu of flowers, donations requested to the First Baptist Church of Holcomb, KU Medical Center Cardiac Unit of Kansas City, KS or Kansas City Hospice and Palliative Care in Kansas City, MO.

The Celebration of Life Services will be held Saturday 10/31/2009 at 4 pm at the Bible Christian Church 1501 E Mary Street, Garden City, KS.