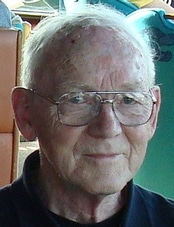 Rolf Woldseth of Foster City passed away in his sleep on October 31, 2008, at his daughter’s home in Missouri after a short battle with skin cancer. He was 78.

Rolf was born January 18, 1930, to Osvald and Aase Evensen Woldseth in Trondheim, Norway. He graduated from the Norwegian Technical University in Trondheim (NTH) in 1954 with a Masters Degree in applied physics. In 1956, he immigrated to the United States and received his PhD in physics from Washington University in St. Louis in 1965. He later taught briefly at the Rensselaer Polytechnic Institute in New York and at Wake Forest University in North Carolina before moving to California where he furthered his career in research and development.

Pop, as we called him, lived a wonderful and enriched life. He was a modest man of great character and spirit. He never could resist the urge to bless us all with his clever (and sometimes corny) puns and sharp wit. Give him a sugar cube with his morning coffee, a toothpick to chew on and a bowling alley within a ten-minute drive, and he was a happy man. Our father knew that life’s greatest treasures were ones you could not buy. He is deeply loved and missed. The many nuances of who he was will continue to live on in the hearts of his children, grandchildren and friends. He also was fortunate to have a tremendous camaraderie with his wonderful Bowling Buddies who kept him dancing down the lane with their jokes and good-natured rivalry. These are the qualities that have made his life remarkable. We are all proud to say he was our father, our grandfather, our friend.

Rolf is preceded in death by his parents, his step-father Leif Schelvan, and his amazing, good-hearted wife Sheila E. Woldseth who died of ovarian cancer in 2006. She was a lucky find for our father. He missed Sheila dearly and we are glad he can be with her again and enjoy her beautiful flowers. She was quite a gardener.

Please come and celebrate our father’s life on Wednesday January 7th, 2009 at 2:00 p.m. at the Foster City Recreation Center, 650 Shell Blvd. in the Lagoon Room.

In lieu of flowers, please consider a contribution to the American Cancer Society.