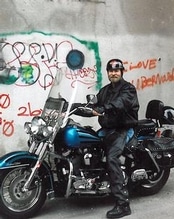 Sam Sellers, 59, Lee’s Summit, MO passed away Thursday, October 29, 2009 at his home.  Memorial services will be held 2PM, Sunday, November 15, 2009 at the VFW in downtown Lee’s Summit.  Friends may call on his family from 1-2PM prior to the service.  Memorial contributions may be made to St. Luke’s Hospice or VFW Post 5198 in Lee’s Summit, MO.

Sam was born September 8, 1950 in Kansas City, MO and lived most of his life in Lee’s Summit, MO.  He was a 1969 graduate of Lee’s Summit High School.  He joined the Navy in July 1970, where he served 4 years and was decorated with the National Defense Service Medal, Vietnam Service Medal with one bronze star, and a Combat Action Ribbon.

In 1984, he went to work for DFAS Kansas City, where he was employed for 23 years until his retirement October 31, 2007. He never knew a stranger and there were only friends he hadn’t yet met.  Sam also had a love for Harley-Davidson Motorcycles.  He made two trips to Sturgis, SD.