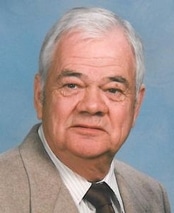 Stanley H Miller, 87, Merriam, Kan., passed away December 15, 2009. Visitation will be held 9-10 a.m. Saturday, December 19, 2009, at Trinity Lutheran Church, Mission, Kan. Funeral services will follow at 10 a.m. Burial in Johnson County Memorial Gardens. In lieu of flowers, memorial contributions may be made to the Alzheimer’s Association.

Stanley was born January 17, 1922, in Winfield, Kan. He was a World War II Army veteran. Stanley graduated from the University of Kansas. He retired after 36 years from Americold, where he was a production manager for the entire limestone mining operation. Stanley was a lifetime member of Trinity Lutheran Church.