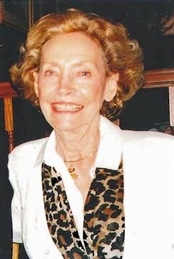 Virginia was born in Kansas City, Kansas on March 19, 1919 to Ward and Olive Martin. She was a lifelong resident of the area, graduating from Wyandotte High School in 1937 and from Tusculum College in Greeneville Tennessee in 1941. Before meeting her husband of 51 years at Aeron during world war two, she was a model and schoolteacher. She raised her children, played bridge, and was active in the Missouri Yacht Club and the Lake Lotawana Community Club.

Her husband, Madison Ralph Jones, and her daughter, Virginia Louise McAlister, preceded her in death. Survivors include her sons John Spencer Jones of Brunswick Maine, Madison Ralph Jones of Austin Texas, and Michael Ward Jones of Nashville Tennessee; her granddaughter Kara Tiffany Danko; and her great granddaughter Zoe Danko of Prague, the Czech Republic; and her faithful companion, Ella. The family requests memorial contributions to Wayside Waifs in lieu of flowers.