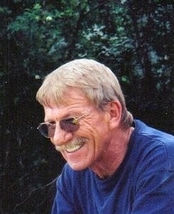 William D “Bozo” Jones, Jr., 59, of Columbia peacefully entered his eternal life, at home with his family on April 27, 2010 after a yearlong courageous battle of lung cancer.

His wishes were to be cremated and no funeral services will be held. There will be a celebration of his life at a later date for family and close friends.

He married, Gayle Fowlkes Jones of Moberly in 1982 and she survives. He was a member of Sacred Heart Church in Columbia, MO.

He attended grade school at St Bernards in St Louis until moving to Moberly where he attended St Pius X, Moberly High School and Moberly Jr. College (Moberly Area Community College) and was Class President his senior year at MACC. He then transferred to Northeast Missouri State Teachers College (Truman State University) in Kirksville, receiving a BS degree in Psychology. He worked his way through college and the following 10 years at Central Mo Paving Co in Moberly and working his way up to plant foreman. He also owned and operated Bozo’s Turn of the Century in Moberly. After an injury forced him to change career paths, he was employed by Orscheln Industries as Traffic Manager. He later moved with his family to Columbia working for many years as the Fleet Superintendent at Dana Corporation, as a leased employee of T F E Inc, a nationwide management staffing company. During his work with TFE he was awarded the outstanding customer service award, an award given to one employee nationwide. After a corporate downsizing, his departure from TFE brought him to Joe Machens Automotive Group as a parts and returns specialist. His favorite accomplishment through all the years of employment was his love for teaching and supervising young adults, working side by side with them in their work, teaching them to be the best they could be in their career paths and was lovingly referred to as Uncle Bill by many young employees and coworkers. He was proud to teach so many young men a work ethic and seeing their self worth through hard work and dedication from a job well done, not only at their jobs but their home and family life as well. His dedication to help others carried over in the last year in his battle of cancer, pioneering two trial study drugs hoping to help doctors and other patients fight the terminal form of Stage IV disease to prolong their quality and length of their life.

His love for teaching started early in life from his love for baseball. In Moberly, he was a gifted, standout baseball player, a game he played spanning over 5 decades of active baseball and softball leagues. He played college baseball at Kirksville and later was drafted in the minor leagues by the Pirates and traded to the Iowa Cubs in a short minor league career. His passion for the game brought him to the coaching and teacher of the game from little leaguers, young competitive baseball leagues as well as Ban Johnson leagues and enjoyed sharing his love for the game with his two sons who were also the talented baseball players as their teacher. He was an avid Cardinal fan and Mizzou Football season ticket holder for many years.

He is survived by his loving wife and best friend, two sons and their wives; Jeffrey and Suzanne Jones of Chillicothe, Mo. and Michael and Christina Jones of Columbia, Mo. He is survived also by his mother-in-law, Nina Fowlkes of Moberly, brother-in-laws and sister-in-laws Franklin “Butch” Fowlkes (Rhonda Franklin), Tina Herrin (Mason Herrin), Chris White (Cory Weathers) and Curtis “Spike” Fowlkes (Kimberly Sharp) all of Moberly. He has many nieces, nephews and cousins who also survive. He is preceded in death by his parents as well as 2 half brothers Ernest Shackelford and Leo Jones and 1 half sister, Mary Anderson.