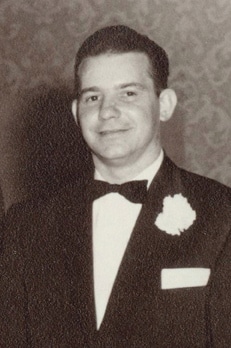 William (Bill) F. Mootz, 84, passed away June 22 at his home in Kansas City, KS.  His wife, Betty (Zane) Mootz, of 58 years was by his side.  Bill was one of seven children of Martin Mootz and Mary (Kovac) Mootz.  Martin and Mary immigrated to the US from Croatia and established roots in Kansas City, KS with their neighborhood grocery store at 6th and Splitlog.  Bill was baptized, attended school, and served as an altar boy at Holy Family Catholic Church.

In 1944 at the age of 16, Bill joined the Merchant Marines which was part of the Coast Guard. He was assigned the tanker Fort Lee which was sunk in the Indian Ocean on November 2, 1944 by the German U-boat  number 181. The tanker was returning from the mid-east with a load of oil when it was hit. Bill survived by swimming to life boat #6 until being rescued on November 9 by another tanker; the USS Tumacacori. In 1945, with a little adjustment to his birth day, Bill joined the Army to assist with the Asiatic Occupation forces. He was discharged in 1947. Then in 1948 he joined the Air Force were he assisted with the Berlin Air-Lift operations. During his service years, Bill enjoyed boxing and was rather good at it.

Bill learned his electrical skills after the military by attending a local trade school with some assistance from a GI program. While he had this knowledge to fall back on, he went to work for Union Pacific as a switchman before he joined the Kansas City Kansas Police Department where he served for fourteen years.  He followed that with a joint venture with his brother Joe to open B. & J. Appliance.  Somewhere along the line, Bill became a master electrician where he started his own company; Bethany Electric. While running Bethany Electric, Bill taught and sponsored several future electricians.

Bill served his country, his community, and his family in multiple ways and will be dearly missed.

According to Bills wishes, his body will be cremated with a burial later at the Veterans cemetery in Leavenworth.  A Memorial Mass will be held Friday June 29 at Holy Family Catholic Church at 10 am, with a family visitation before mass.  All are invited for a luncheon after mass at the Holy Family Hall.

In lieu of flowers, donations may be made to Holy Family Church 274 Orchard Kansas City, KS 66101.