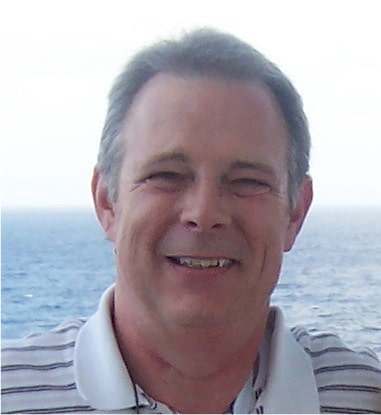 William Lee Raumaker, Jr. (known as Bill to his family and friends) died at the age of 60 at his home in Blue Springs, MO on November 11, 2013.
Bill was born an only child on January 3, 1953, in Dyersburg, TN, to William Raumaker. Sr and Helen Gray.  He was raised in Sedalia, MO, and graduated from Smith Cotton High School in 1971.  Bill was an athlete in school,  competing in track and field, swimming and diving, but his passion was football.  He was very talented in music, playing several instruments with the favorite being bass guitar.  While attending school in Sedalia he met his high school sweetheart, Sue Cook.  He said from the moment he saw her, he knew she was his soul-mate.
Bill and Sue were married August 25,1972 and had their first child, Karen, shortly after.  In 1973 they moved to Springfield, MO where Bill began his employment with Southwestern Bell.  In 1976,  Kelly was born and added to the family.  In 1977, SWBT transferred the Raumaker family to Blue Springs, MO where they continue to live.  In 1979, the family was complete with the birth of Mark in June.  Family was everything to Bill and was constantly kissing and hugging his Suzie and the children.  No one ever finished a visit or phone call without an “I love you, kiddo.”  He was the happiest when everyone was together, whether it was playing games or watching football.
Bill loved to travel and learn.  Sue often said that he was like a sponge because he could never acquire enough knowledge.  Sue and Bill felt blessed that they were able to visit historical places such as battlefields, homes of presidents or any B&B with a good ghost story.  He lived for memories and family vacations were a yearly event and especially loved taking cruises.
Bill had many passions and hobbies, with reading, sports, movies and animals being the most important. Bill was always reading, occasionally two or three books at a time. His favorite author by far was Stephen King and was very proud of his collection. He also enjoyed sports and coached several little league teams.  He had a tremendous love for animals.  He always had at least one dog in his home.  The dog of his life was Quincy.  He trained her to be a Hospice Therapy Dog and visited several nursing homes, along with St. Mary’s Hospital.  He loved the positive effect his “girl” had on the sick.  They were buddies and often seen around town together.
Bill’s life was never the same after the birth of his grandsons, Dylan in 2004 and Dawson in 2005.  The boys warmly referred to him as “Pops”.  He instilled in them the power of education.  He was always reading to them, helping with homework and telling them stories.  He loved attending they’re sporting events and never missed a Grandparents Day at their school.
Bill worked as a sales manager for Southwestern Bell Telephone Company for 30 years, retiring  in 2003.  He continued his career with Sprint until 2006.  Bill earned a degree in Business with a BA in Marketing, continuing his education and earning a Masters Degree in Information Management Systems. He also taught at Avalia University in their MBA program.
He is preceded in death by his father William L Raumaker, Sr. He is survived by his mother, Helen Ohlson, his wife of 41 years, Sue Raumaker, his children, Karen Long, Kelly Raumaker, Mark Raumaker, wife Sarah Raumaker, and grandsons Dylan Long and Dawson Long. Visitation will be held at 5 p.m. Thursday, November 14, with a celebration of life to follow at 7 p.m. at Woods Chapel United Methodist Church, 4725 NE Lakewood Way, Lee’s Summit, MO 64064.
Contributions in Bill’s name may be mailed to: Sedalia School District Foundation, PO Box 2505, Sedalia, MO 65301.  Attn: Cedar Hill Scholarship Fund in Memory of Bill Raumaker or to the American Cancer Society.