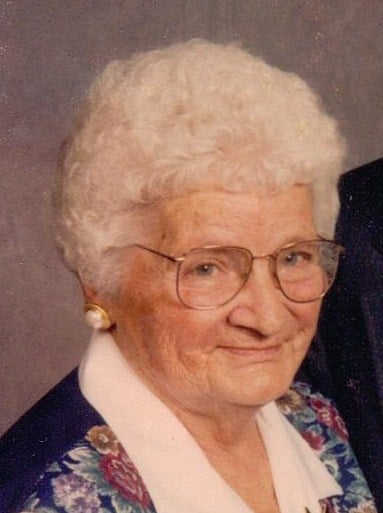 Letha Thelma Wiggins Thatch was born December 13, 1924, the daughter of Hyram Horace “HH” Wiggins and Ruby Faye Hawkins Wiggins.  She was born in McKenzie, Alabama, and moved to Kennett, Missouri when she was five years old.  Her family had a cotton farm there.  She attended Deering High School and graduated from there in 1944.  She went to the U.S. Cadet Nursing Corps and graduated as a registered nurse in 1947. She worked as an RN at the VA Medical Center and retired in1983 after 30 years of service.  She married Charles, the love of her life, on June 21, 1947.  To this union were born two children, Del (Beverly) of Lamar, Missouri, and Charlene of Belton, Missouri.

She loved her grandchildren and great grandchildren, fried chicken, fried okra, cornbread, watermelon, and crowder peas.  She was a true southerner.  She enjoyed going to movies and craft shows and loved going to her favorite vacation spot, Branson, Missouri.  She also loved to go fishing and would often out-fish Charles, much to his dismay.

Letha waits in heaven for her children, Del and Charlene, and her grandchildren, John (JT) and Maggie of Raymore, Missouri, and Debra and David Samek of Springfield, Missouri and great grandchildren, Joel, Joshua, Jonah, Jay and Henry Thatch and Lori Breece, and Cooper and Spencer Samek.  She is meeting in heaven her husband, Charles, brothers, Leon, Elwin, Darwin, James, Horace, Dowell and Caltin, and one sister, Grace.  She will be waiting for one sister, Fairris.