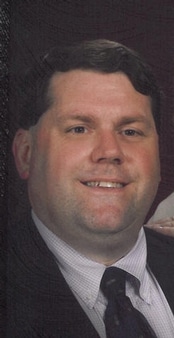 Benjamin H. Lane, III, of Liberty, MO, died Tuesday, February 1, 2011.  Ben was born on April 28, 1960 on Hamilton Air Force Base in Novato, CA.  As a teenager he lived at the American Legion Children’s Home in Ponca City, OK and graduated from Ponca City High School in 1978.  He received a B.S. in Math and Physics at Northeastern Oklahoma State University, graduating in 1983.  One of his proudest achievements was twice qualifying for the National Debate Tournament.  He met and married the love of his life, Gina, December 17, 1983 in Fayetteville, AR, and they moved to Kansas City, MO.  After working as a software engineer, he decided to go to law school, receiving a Law Foundation Merit Scholarship and the American Jurisprudence Award for legal research and writing. He received a J.D. from the University of Missouri-Kansas City Law School in 1993.  He clerked for the Hon. Joseph M. Ellis at the Western District of the Missouri Court of Appeals, worked as an associate at Shook, Hardy and Bacon, served as an Administrative Law Judge for the Missouri Public Service Commission, and most recently as an associate at Allmayer and Associates.  He was an elder at Northminster Presbyterian Church, and he loved singing bass in the choir.  He enjoyed traveling, sports, and computer gaming.  Through the years he often traveled and judged debates with Gina and the William Jewell College debate team.  He is survived by his loving wife, Gina, his sister-in-law, Valerie Vanderpool, her husband Mark Vanderpool, and their son, Justin.  He so loved his adopted family, Charles Danley and Ruth Danley, of Bartlesville, OK, and their son and daughter-in-law, Brian and Therese Danley of North Kansas City.  He is also survived by his father, Benjamin H. Lane, Jr., of Lakeland, FL,  his sister, Luani Lehman of Spokane, WA, and numerous cousins.  A memorial service to celebrate Ben’s life will be Saturday, February 26 at Northminster Presbyterian Church in Kansas City, MO at 1441 NE Englewood Road.  Visitation will begin at the church at 1:00pm; Memorial Service at 2:00pm.  Memorial fund donations may to support William Jewell debaters in care of the William Jewell College Office of Advancement, or to Northminster Presbyterian Church.