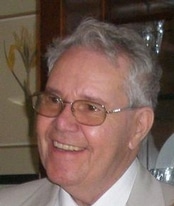 Bill Patterson, 77, Fairway, KS passed away January 28, 2010 at Kansas City Hospice House surrounded by his family. Heart disease was the contributing cause of his death. Bill was born February 1, 1932 to Hazel and Walter Patterson, the last of 6 children, in Metropolis, IL (the home of Superman, he liked to tell people!) The family moved to New Albany, IN where he attended public schools until entering Indiana University, earning a BA. He was a Sigma Chi. He entered the Army as an ROTC cadet immediately following graduation. Bill met and married Sharon (Weber) Patterson, of neighboring Jeffersonville, IN, while in the Army and decided to make the military his career. They traveled to Alabama for Helicopter School followed by a tour of duty in Hanau, Germany. Bill spent 2 tours of duty in Vietnam (1965 and 1968) in between earning his MBA in marketing at Roosevelt University in Chicago. He attended General Staff College prior to his assignment as a Professor of Military Science at Wentworth Military Academy, Lexington, MO, retiring from there in 1975 for his 20 years of service. They moved to Fairway, KS after retirement where he began his civilian career in banking on the Plaza. Several other career opportunities followed-teaching at the Brown Mackie College, Director of Aero Mechanics School at downtown airport, and finally, real estate. Bill enjoyed fishing and hunting as a young man and horse and dog racing in his later years. Woodlands was an important destination and he mourned its closing. He was an avid IU basketball fan (Bob Knight, his idol) and maintained long distance communication with childhood friends, fraternity brothers and Army Aviators (503rd Aviation Co.) regularly and attended all reunions. He was preceded in death by his parents and 4 of his siblings, Dr. Cecil Patterson, Juanita Grube, June Eurton and Maurice Patterson. He is survived by his sister Lucille Stevens; wife, Sharon; son, Joseph (Linda); daughter, Lee Anne (Chip); and 5 grandchildren, Meagan, Ian, and Greer Keith, and Drew and Dierdre Patterson, all whom he was very proud. Bill requested cremation with inurement and full military honors at Ft. Leavenworth National Cemetery at a later date. A memorial Mass will be celebrated at St. Agnes Catholic Church, Roeland Park, KS on Saturday, February 6 at 11:00 a.m with a visitation with the family an hour before and lunch following. In lieu of flowers memorial contributions may be made to St. Agnes School, American Lung Association, or a charity of your choice. Special thanks to the wonderful care he received at KC Hospice House & Palliative Care.