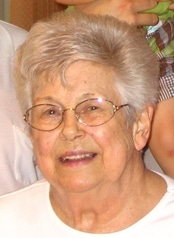 Bonnie J. Hooper passed away with family by her side on October 26, 2008 and is finally pain-free after years of battling rheumatoid arthritis and its debilitating complications.

Bonnie was born on June 27, 1929. She attended school in Adrian, MO, moved shortly after graduation to Kansas City and married Ken Hooper, with whom she attended school. They subsequently purchased their first home, moved to Raytown in 1951 and recently celebrated their 60th wedding anniversary in June. By choice, Bonnie was a “stay at home mom” to her sons. She had also been very active in her church (then Countryside United Methodist) and volunteered at Research Medical Center for many years. She was proud of her membership in DAR and had an active interest in genealogy (before the internet), traveling extensively to locate and document information on the Smith and Hooper lineage. She enjoyed playing the piano and, at one time, participated in Sweet Adelines and the Raytown Music Guild.

Bonnie was predeceased by her parents, step-sister and son Tim. She is survived by her husband Ken, son Jerry (Lisa) of Lee’s Summit, grandsons Ryan (Rolla, MO), Lauren (Lawrence, KS), Chris (Anna) of Kansas City and Nick (Kristy) of Greenwood. She is also survived by one great-grandson, Seth. Visitation is to be one hour prior to the service which will be held at One Spirit United Methodist Church, 7900 Blue Ridge Blvd, Kansas City, MO. Cremation will occur with private inurnment in Crescent Hill Cemetery at a later date. The family wishes to thank Dr. Rebecca Turner for her nurturing care for the last few years. We also appreciate the doctors and nurses at Research Medical Center who participated in Bonnie’s care during the past two decades. Donations are suggested to either the National Kidney Foundation or the Arthritis Foundation’s Hope Through Heroes memorial internet site.