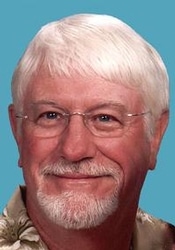 Don L. Watkins went home to the Father on September 13, 2010.  He was born to Walter W. and Susan B. (Slyngstad) Watkins on January 11, 1946 in Kansas City, Missouri. Don graduated from Rockhurst High School in 1964. He joined the Marine Corps and served one tour in Vietnam “66-67”. On October 7, 1969 he began his career with Southwestern Bell Telephone Company as a lineman and retired in May of 2000 as a computer tech for AT&T. His hobbies included scuba diving for more than 20 years with the Kansas City Frogman Club. Don enjoyed the art of barbeque competition as a member of the KCBS and later became a certified barbeque judge. He was most proud of his BBQ ribs and chicken wings.

Golf was a big joy after retiring, playing with the “guys” every week until his health deteriorated. He was beginning to get deeply involved in stamp collecting as a member of the Midwest Philatelic Society and finally acquired the “U.S. Scott #1”. Don’s Friday mornings were greatly enjoyed having coffee with his fellow retirees at HyVee on Noland Road.

Don was a loving husband and father.  He was very generous with his time, talent, and resources. Don will be greatly missed but never forgotten.  He was preceded in death by his father; and his brother, Richard Alan Watkins.  Don is survived by his mother Jerry D. Watkins; wife of 37 years, Colleen A. (Hurley) Watkins; daughters, Annamarie Denney (Piers) and Jennifer C. Paasch (Chris); son, Robert A. Watkins (Jenni) of Columbus, OH; daughter, Katharine M. Barnes (JR); and 7 grandchildren, Monte, emma, Chasten, Mary, Landon, Ian and Gregory.  An informal gathering will be held on Thursday, September 16, 2010 from 1-4 pm at the family home.  In lieu of flowers, contributions may be sent to USO, P.O. Box 96860, Washington D.C. 20077-7677. cremation