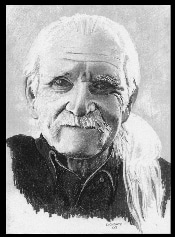 Don Choate, 88, a gentle man, friend, artist, humanitarian, singer and lover of life, made his journey on October 9th at home, surrounded by the love of his family. Don delivered ice when he was a young man growing up in Greenville, Michigan, it was before television, when families sat around and listened to the radio in the evenings.  He lived to be part of the accelerated life of the 21st century.  It was a long and good life.

Don was born on May 24th 1920 in Grand Rapids, Michigan to Kate Alden and Fred Choate. He grew up with four siblings, Bob, Helen, Kay, and Barbara and attended the University of Michigan in Ann Arbor. After graduating he moved to New York City, where he met Jane Pitman at the Art Students League.  They married and raised 3 children, Lenore, David and Rebecca, in rural New Jersey.

He worked as a greeting card designer and hand letterer at Norcross cards in New York City and later became a freelance designer.  In 1968 Don and Jane divorced and in the seventies he traveled around the country, eventually settling in Columbia.

For many years he worked in Columbia as a fine woodworker, making custom furniture and sculpture.

Later Don worked at the Mid Missouri Food Pantry. He was kind and non-judgmental, touched the lives of many and always found the time to listen.  He began drawing portraits of some of the people who passed through the Pantry because he saw so much of life reflected in their faces. Don has always been politically and environmentally active, working to make the world a better place.

We will miss him more than words can describe and he will be forever alive in our hearts and memories.

The family invites friends to celebrate Don’s life with a retrospective showing of his artwork on Sunday, November 2 from 2 PM to 5 PM at the Alleyway Arts studio on Broadway Alley, parallel to Walnut and Broadway between 10th and Short Streets, behind K-Lani Hair Salon.