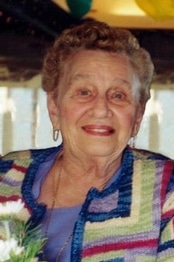 Florance Louise Berner Garrett, 89, a woman known for fun and the love of family, passed away on September 10, 2009.

She was born on July 23, 1920 at Brokaw Hospital in Bloomington, Illinois to Louis and Eleanor Berner who preceded her. Her brother, Louis Berner, Jr., and sister, Eleanor (George) Hunt, also preceded her.

Prior to college she became a certified Red Cross Water Safety Instructor and learned to sail as a Mariner Scout.

She graduated from Illinois Wesleyan University, Bloomington, Illinois, with a Bachelor of Science in Home Economics in 1943. A member of the Omicron Chapter of Kappa Delta Sorority, Florance was one of the instrumental-founding alumnae that brought the Epsilon Iota Chapter to the University of Missouri – Columbia. She is an Emerald Circle member of Kappa Delta for over 60 years.

After marrying Dayle in 1944, she left Bloomington to work for civil service while her husband was serving in the U.S. Army. She taught typing to military personnel at Camp Patrick Henry in Newport News, Virginia.

Florance and her family moved to Columbia, Missouri in 1960 and has been a loyal Missourian ever since. The Missouri Tigers quickly became her football team of choice. She was a loyal fan at Faurot Field with many years of season tickets which she enjoyed with Dayle. While watching games on television she would yell encouragement to the players, “Someone help him!”

Her life revolved around her family, her friends, and her church. Florance’s Christian faith sustained her throughout her many wonderful years.

Upon her husband’s retirement in 1983, they wintered together for over 20 years in Clearwater, Florida. She was an active associate member of The Trinity Presbyterian Church.

Her love of games was contagious and all of her children and grandchildren learned from “the master” how to play Canasta and other games. Florance was an avid Bridge player.

Her love of Dayle is legendary and beyond measure. They met in church choir at The First Presbyterian Church in Bloomington, Illinois while both were in college.

A celebration of her life will be held at The First Presbyterian Church, 16 Hitt Street, Columbia, Missouri on September 12 at 1:00 p.m., with a reception to follow at the church.

Interment will be at East Lawn Cemetery in Bloomington, Illinois at a later date.

The family suggests memorials be given to The First Presbyterian Church, 16 Hitt Street, Columbia, MO, 65201.

Thanks be to God for this wonderful woman!