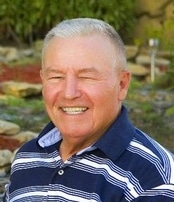 Gerald “Jerry” E. Kelly, 73, of Peculiar, Mo., passed away January 15, 2011, surrounded by family.  The memorial service will be 3 p.m. Wednesday at First Baptist Church of Peculiar, 184 E. Broadway, in Peculiar.  He is survived by his wife Jo Ann (Westerman) Kelly of the home; sister Kathleen Kirchner and husband Charles of Kansas City; brothers John Kelly and wife Mariann of Wildwood and Kevin Kelly of Kansas City; sons Kelan Kelly of Denver, Stephen Kelly and wife Melissa of Lee’s Summit, Timothy Kelly of Kansas City, Denis Michael Kelly of Peculiar and Jeffrey Kelly of Kansas City; daughters Ann Adams and husband Dan of Kansas City and Elizabeth Kelly of Independence; 12 grandchildren and two great-grandchildren.  He was born Oct. 18, 1937 to Angelina (Cathlina) and Gerald R. Kelly who resided in Rockford, Illinois.  Jerry called many places home growing up until his family settled in Kansas City in 1953.  He attended Catholic seminary for five years. He served as a specialist in the U.S. Army from 1959 to 1961.  A 1964 graduate of Rockhurst College, he taught middle school social studies before transitioning into educational sales.  He built a career in sales, working for various companies. He spent the final 10 years of employment assisting with a family member’s business until his retirement.  He and his wife were longtime members of St. Catherine of Sienna Catholic Church in south Kansas City until they moved to Peculiar in 2005.  Jerry enjoyed spending time with his kids and grand kids, fishing, golfing, exercising, ballroom dancing and reading.  He was a loving husband, father, grandfather, brother, uncle, neighbor and friend who will be greatly missed.