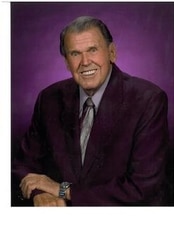 Howard Wayne Bradley, age 84, passed away after a brief illness on August 6, 2010.  Howard worked 34 years as an Outside Plant Engineer with Southwestern Bell, retiring in 1982.  He began a second career as a music entertainer in the Kansas City area providing countless programs singing and on keyboards in nursing homes, retirement centers and other public venues.  He was often accompanied by his son on trumpet.  Nicknamed the “Vintage Hit Man“, his music was always positive and upbeat and he found great fulfillment uplifting the spirits of others.  Howard was born in Kansas City and attended Central High School.  He joined the Army during WWII at age 16 (fibbing about his age) to join his two older brothers who were pilots but ended up in the Army Medical Corps in Burma and China.  He was preceded in death by his wife of 47 years, Floretta Bradley and is survived by his son, Mark Bradley; daughter-in-law, Terri Bradley; and grandsons, Kirk and Eric Bradley.  In a world that is filled with very special people, Howard Bradley truly stood out.  His incredibly kind, gentle, humorous and positive nature touched the lives of all who knew him and he will be missed.  A visitation will be held at Missouri Funeral Care, formerly Hinton Funeral Home in Raytown, MO on Wednesday, August 11, 2010 from 10:30 to 11:30 am.  Funeral service will be at 11:30 am followed by burial at Floral Hills Cemetery.