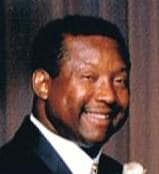 Jack Murphy Gipson, 67, of Kansas City, Kansas, passed away April 21, 2008 at Golden Living Center Parkway in Edwardsville, Kansas. Funeral services will be held at Open Door Baptist Church, 3033 N. 103rd Terrace, Kansas City, KS 66109. The visitation will be from 4-6 p.m. and the funeral to follow at 6 p.m.
Jack was born February 25, 1941 in Shreveport, Louisiana to Nathaniel and Exie Bernice Gipson. He graduated from Argentine High School in 1960, attended Independence Community College, spent 3 years in the Air Force, attended Rockhurst College in 1965, graduated from Sacred Heart College in 1970, and received his Masters Degree in School Administration from CMSU. He mainly worked as a teacher, basketball coach and administrator in K.C.K.
Jack reflected a strong faith– demonstrating it daily. He taught his children Christi (Gipson) Diggs and Scott Gipson to have a foundation in Christ Jesus. He was a true partner to his wife of 41 years, Paula R. Gipson. They shared sports, hobbies, and the Bible together. He is also survived by three granddaughters; one brother Vernon Gipson and one sister Gloria Davis; and many other family members. In lieu of flowers, memorial contributions for medical expenses can be made to Open Door Baptist Church.