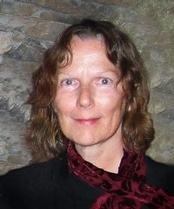 Kathleen Myda Smith (née McFarling), 55, passed away at University Hospitals, Columbia, MO, March 23, 2011, of metastatic cancer. A celebration of life will be held at a later date. Kathleen was born on Nov 9, 1955 in Kansas City to Robert and M. Myda Hutinger McFarling. She married Danni Smith July 24, 1976 and was a homemaker for 15 years. Kathleen was a professional artist who opened and managed The Artful Hand Gallery in Kansas City, where she sold her ceramics, in the 1990s. After its closing, she went on to study programming languages to develop and maintain websites, specializing in the emerging field of search engine optimization. She moved to Las Vegas in 2004 where she managed the family-owned McFarling Law Group. After spending a year in California, she returned to Missouri in 2010. Kathy loved the Loose Park Rose Garden (Kansas City) and the Henderson Bird Viewing Preserve for quiet walks and bird watching. Survivors include her son Dylan of Las Vegas and daughter Tara (Jeremiah) Duncan and precious granddaughter Charlotte of San Francisco; sister Paula McFarling (Peter) of Columbia; brother Steven McFarling of Medford, OR; brother Denis McFarling of New York City; nephew Aaron Johnson (Nazak) and children of Columbia; nieces Molly Johnson of St. Louis, and Emily McFarling Benson (Kenny) and son of Las Vegas; and a special cousin, Sharon Calkin (Boualem) of Pasadena. Kathy was preceded in death by her parents. Memorial contributions may be made to the Henderson Bird Viewing Preserve or cancer research.