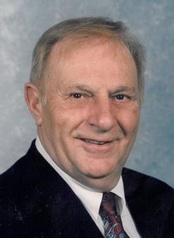 Keith Blythe, 79, Oak Grove, MO, passed away August 7, 2010 at Centerpoint Medical Center in Independence, MO.  A memorial gathering will be held 1 PM to 3 PM, August 11, 2010 at Heartland Cremation and Burial Society in Raytown, MO.  Burial will be at 1 PM, August 12, 2010, in White City Cemetery, in Keith’s hometown of White City, KS. Keith was born August 30, 1930 in White City, KS to Benjamin and Bernadine (Gruber) Blythe. Keith worked for the Federal Aviation Administration (FAA) for 30 years and then 5 years with the United Nations as a consultant, with all 5 years being spent in Indonesia.  Keith enjoyed classical music, gardening, and his dogs. In his retirement he worked part-time for Wal-Mart and Hy-Vee were he was  "A world class salesman, with his gift of gab!" He had a strong believe in his faith and believed in the power of prayer.  He enjoyed and loved every minute of life, and he will be missed by all that knew him.  Keith is preceded in death by his parents, and a brother, Junior Blythe.  He is survived by his wife Vera, of the home, his children; Debbie Blythe of Colorado Springs, CO, Deni Lyons (Jeff) of Independence, MO, Sue Blythe of Colorado Springs, CO, and Maria Blythe of Oak Grove, MO.  Also surviving Keith are 6 grandchildren and 4 great-grandchildren, and a host of loving friends. The family suggests memorials be made to The American Cancer Society.