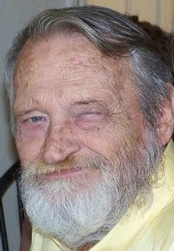 Kenneth Patrick McDonald was born December 16, 1935 in Wichita, Kansas.  Ken overcame early challenges in life, learning to be independent and self-sufficient which led to his enlistment in the United States Air Force, where he served for four years.

Ken’s natural abilities communicating and interacting with people led to a successful career as a shoe sales representative selling to such stores as Nordstrom’s, Macy’s and The Jones Store.  Ken was a natural salesman and enjoyed his work, travel and contact with people.

Ken had diverse interests and hobbies.  He enjoyed working with burl wood; the unique shapes and ring patterns allowed Ken to create individualized, handcrafted works of art such as clocks and incorporated his talent as a painter, some of which are kept by his family as a testament of his craftsmanship.

Another of Ken’s passions was reading, consuming volumes of information, especially historical accounts as quickly as he could.  A conversation with Ken could quickly turn into a lesson of unique facts and accounts not only from literature but from his own life experiences.  He also enjoyed taking drives through the countryside, the outdoors, bird watching and was a lover of animals, especially cats.

Ken’s unique sense of humor will be missed.  He enjoyed joking with and teasing his extensive family, young and old, bringing a smile to their faces in a mischievous way.

Kenneth Patrick McDonald passed away May 19, 2010 at the age of 74.  He passed quietly, surrounded by his family.  He is survived by his wife, LaDonna; his sons and daughters, Renee’, Brian and wife Dana, Douglas and wife Amy, Claudine and husband David, Robert, and numerous grandchildren and soon-to-be great grandchildren.