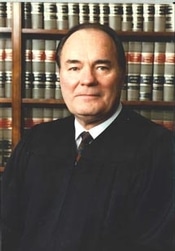 Judge Lee E. Wells, retired, 16th Circuit Court of Jackson County, died peacefully at home in Kansas City on Friday, October 31. A memorial service will be held on Thursday, November 6, at Country Club Christian Church, 6101 Ward Parkway, Kansas City. Visitation will begin at 12 p.m. in the church parlor and the memorial service will follow in the sanctuary at 1 p.m. Judge Wells was born November 17, 1930. He was educated at Northeast High School, and received his bachelor’s degree in business administration from the University of Missouri-Columbia. He completed two years of military service as a trumpeter in the Military Band at Fort Leavenworth, Kan., and returned from the service to earn his law degree from the University of Missouri-Kansas City. After a successful career in private law practice, Judge Wells was appointed to the bench on August 1, 1986, by Governor John Ashcroft. He served 14 years, during which time he was selected as Presiding Judge in 1993 and 1994. He retired in December, 2000. He remained an active Senior Judge, hearing cases and conducting trials, until his death. While a member of the Jackson County 16th Circuit Court, Judge Wells presided over several high profile cases. He also was a mentor to law students and young lawyers, and active in professional associations, including the Kansas City Metropolitan Bar Assn. and its Ross T. Roberts Inn of Court program. He is survived by his wife, Donna, and two children, Edward Lee Wells and spouse Heather; and daughter, Betsy Wells of St. Louis; stepsons, Russ Baltis and partner George Kahn, Bo Baltis and wife Joanne, and David Baltis and wife Mary. He also leaves his two sisters, Betty Jo Gualtier, his twin sister, Lou Ellen Webb, and cousin, H.W. Wells and Betty of Steele, Mo. Grandchildren are Hadley, Brady and Molly Wells and Cameron Phillips. There are six nephews and nieces. He is also survived by his former wife and the children’s mother, Judy Wells. He will be missed by the boys in the band, his friends of 60 years, Dr. Logan Holtgrew, Annapolis, Md.; Eldon Smith, Palm Springs, Calif.; and Gene Hall, Kansas City, Mo. In lieu of flowers, contributions may be made to the University of Missouri- Kansas City School of Law, the Honorable Lee E. Wells Memorial Scholarship, 5100 Rockhill Road, Kansas City, MO 64110. His love of family, law and music never wavered.