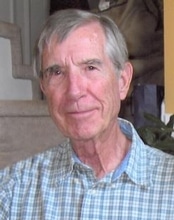 Lyle Leonard Reeves 87, Lee’s Summit, MO passed away August 12, 2010.  Lyle was born August 5, 1923 in Des Moines, Iowa to Ivan Reeves and Lillian Rufner. He graduated from Martensdale High School in 1941 and received Bachelors and Masters degrees from Drake University in Des Moines following service in WW2, in England in the 8th Air Force. Lyle was employed for 39 years as a teacher and guidance counselor by the Des Moines Public Schools. Lyle was preceded in death by his parents and two sisters, Dorothy Spilman and Wandalee Smith. Lyle married Elizabeth Jane Deheck in 1950 and they lived in Des Moines until 1994 when they moved to Lee’s Summit Missouri to be closer to their grandchildren. In retirement they divided their time between Harlingen, Texas and Lee’s Summit. Lyle is survived by his wife, E. Jane, and daughter, Linda Ryan; son in law Tom Ryan and grandchildren, Hollie and Cory Ryan; 5 nephews, Ronald and Lyle Spilman, David, Paul and Daniel Moede; and 1 niece, Nancy Wright, and their families. Donations can be made in Lyles name, to The Salvation Army or the Warren County Iowa Historical Society.