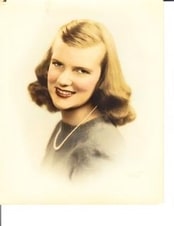 Patricia Louise Merrill, 79, of Eldon Missouri was guided home to God by her angels on April 25, 2010.  She was born on October 17, 1930 in Springfield, MA to the late Clarence & Faye Frederick. She will be greatly missed by her husband of sixty years Richard Alvin Merrill, her children, Frederick Merrill and his wife Linda, John Merrill, Robin Brod-Korb and her husband Larry and Richard Merrill, Jr. all of Eldon, MO, her daughter Patricia McCormick and her husband William of San Clemente, CA and her daughter Judy Paul of Holland, MA as well as 11 grandchildren and 15 great-grandchildren.  Memorials can be made to the American Association for Cancer Research.