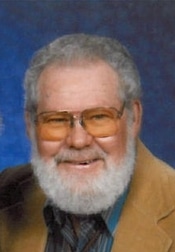 Raymond Daniel, 74, Edwards, MO, passed away Nov. 27, 2008. Raymond was born in Mound City, KS, on Feb. 7, 1934 to Clarence and Rilla Daniel. He moved to Kansas City in 1940 and enlisted with the Marines at the age of 18. After his service in Korea, he returned to Kansas City and Married Betty Rhoads, in Aug. of 1956. They moved to Lee’s Summit in 1966. Raymond retired from General Motors in Leads, after 30 years of service. Raymond and Betty moved to Edwards, MO, in 1986, and built a log home. Raymond is preceded in death by his parents, a brother Charles Daniel, and a sister Mary Eileen Torrey. Surviving Raymond are his wife of 52 years, Betty, son Robert Daniel, Harrisonville, MO, two granddaughters Bettina Daniel, and Lori Canzoner and husband Joe, two step-sons, Cody and Nick Morse, a daughter Terri Higginbotham and husband Don of Osage Beach, MO, two grandsons Travis and Casey. Also surviving Raymond are two sisters Ellen Baston and Rosalee Perkins, and a host of distant relatives and friends. There will be a memorial service on Dec. 7, 2008 at the 1st Christian Church of Harrisonville, 400 S. Independence, Harrisonville, MO 64701, at 2 p.m. In lieu of flowers, the family suggests memorial contributions to the Kansas City Hospice House, 12000 Wornall Road, Kansas City, MO 64145. The family would like to thank the caring staff at the Kansas City Hospice House, and all the friends and family for their thoughts and prayers.