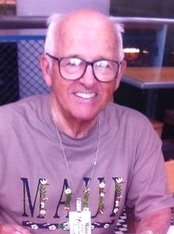 Richard D. Reineck, 87, of Shawnee, Kansas passed away Friday, March 25, 2011. He was born March 7, 1924 in Bluffton, Indiana.  Graduating from Bluffton High School, Richard moved to California where he graduated from the University of California at Los Angeles with a Bachelors degree in Business Administration.  Richard worked in the aerospace industry for years before retiring from Rockwell International in 1989. Richard’s zest for life, and love for his family and friends were his hallmark.  He truly enjoyed spending time with his kids and later in life his grandkids alike.  Richard touched so many lives in so many ways; his life story will be told for generations to come. Richard is survived by his wife, Barbara Reineck and their 4 children, Dr. Scott Reineck of Del Mar, California; Jill Cooney of Olathe, Kansas; Brett Reineck of Tustin, California, Lynn Mulder of Shawnee, Kansas, and 8 grandchildren.

A memorial for Richard ‘Rich’ Reineck is being planned by his children to be held April 9, 2011 in Orange, California, further details to follow.