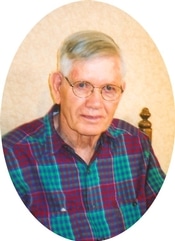 Bob moved with his family to Syracuse , Kansas as a small child.  The family later moved to Conway Springs and Bob graduated from Conway Springs High School with the class of 1944.

Bob entered the U. S. Army on  November 22nd  1942. He was trained and worked repairing shoes while stationed in New York during WWII.  He was honorably discharge on February 26th 1946 and returned to Conway Springs to open his own shoe repair shop.

Bob was united in marriage to Patricia Gene Wise on October 4, 1944 at Conway Springs , Kansas .  They made their home in Conway Springs most of their lives where they raised their two boys Rick and Kirt.

Bob began working for Boeing Aircraft in Wichita in 1948 in sheet metal fabrication.  He retired in 1984 after 36 years with the company.  They moved to Wichita in 1991.

Bob and Pat loved to travel.  In their journeys, they got to tour and see places like Egypt , Jordan , Bahrain , Panama , Europe, and Thailand.  Pat died on October 8,2002 and Bob moved to Overland Park, Kansas in 2005.

He was also preceded in death by his parents; two brothers: Charles and Dale Herzig.