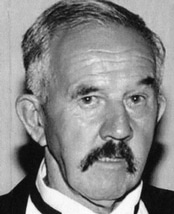 He was born July 6, 1921, one of nine children to Matthew and Pearl Edmonds of Leavenworth, KS.

Russell was a dairyman in Leavenworth County for many years and later worked for the city of Tonganoxie before retiring.

He is survived by his wife of 50 years, Reba J. Edmonds of McLouth; his daughters, Roxane Polley of Leavenworth, Teresa Edmonds of Shawnee and Kathleen Turner of Grain Valley, MO; his sons, Russell Edmonds, Jr. of Bonner Springs and Matthew Edmonds of Basehor; seven grandchildren; four great-grandchildren; his sisters, Bernice Smith of Tonganoxie and Rosalea Heuvel of Leavenworth; and his brothers, Chester Edmonds of Texas and Willis Edmonds of Leavenworth.

A memorial service for Russell will be from 2 to 5 PM on Saturday, March 8, 2008 at the Florence Riford Senior Center, 530 Bury St. in Tonganoxie.

In lieu of flowers, the family suggests contributions be made to the Coalition for Independence, 4911 State Ave., Kansas City, KS 66102 or The Council on Aging, attn: Linda Lobb, 109 A Delaware, Leavenworth, KS 66048.