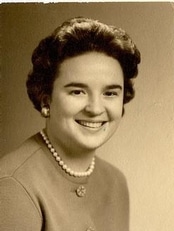 Ruth Ann Meyer passed away peacefully on Friday January 21, at Kingswood Health Center in south Kansas City listening to Paul McCartney singing sweetly on the radio. Born in Kansas City, Kansas on April 2, 1930 to Frank and Rose Meyer, she attended St. Rose of Lima Elementary School and graduated from Bishop Ward High School and Kansas City Kansas Community College. Ruth’s career in radio began in KC in the 1950’s where she worked for KCKN and WHB radio stations. She relocated to New York where she worked at WMGM Radio then moved to WMCA where she became “first lady” as Program Director from 1962 to 1968. She initiated the ‘WMCA Good Guys’ concept complete with a happy face logo designed by Ruth and a team approach among the Dee Jays, taking the station to the number one Top 40 station in New York City. She was instrumental in bringing the Beatles to the United States. Following her time at WMCA, Ruth went to WHN Radio that was playing an adult standards format. With the burgeoning interest in Country music, Ruth and the management team at WHN switched the station’s music format to Country. She also brought on board some of her WMCA Good Guy Dee Jays to work the format which would reign as one of the nation’s most influential Country radio stations for the next decade. Following WHN, Ruth moved on to become Program Director at the legendary WNEW radio. Her final years in New York were spent in programming management for NBC Radio Network’s new youth network, The Source, and finally at ABC Radio Network before retiring to Kansas City in 1993. During her years in New York, Ruth also travelled to Europe on a regular basis and was as at home in Switzerland, Austria, Germany, Italy or France as she was on the streets of New York, her favorite being Provence in the South of France which she fondly recalled by growing lavender at her residence in Kansas City. Referred to as “a most amazing woman” by those who knew her, Ruth, raised in the Midwest, became a force in radio broadcasting in New York City at a time when women were just coming into their own in the work place. She will be greatly missed by family and friends A memorial service will be held at St. Catherine’s Catholic Church, 4101 E. 105th Terrace, on Friday, Feb. 4, at 10 a.m. with a funeral Mass at 11 a.m. Burial will be at Mount Calvary Cemetery in Kansas City, Kansas. The family requests that memorial contributions be sent to the Broadcasters Foundation of America, 125 W 55th Street, Twenty First Floor, New York, New York 10019-5366. (arr: Heartland Cremation & Burial Society 816-313-1677)