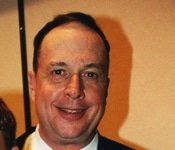 Samuel Thurston Harrington, 64, passed away due to complications of heart disease Friday, June 6, 2008 at his residence in Kansas City, MO. Born on September 14, 1943, he grew up in Lathrop and spent his time on the family farms where he rode his horse and played with his friends in the hay barns and later worked in the fields. He loved driving his Willies Jeep exploring northwest Missouri.

Sam attended primary and high school in Lathrop, graduating in 1961. He attended the University of Missouri at Columbia from 1961 thru 1965 and then Rockhurst College in Kansas City. He graduated from Rockhurst in 1969 with a Bachelor of Arts degree in English. Sam enjoyed traveling during summer breaks from college. After leaving MU he traveled the entire US and into Mexico in his new red VW bug. After graduation he worked in the men’s department at Halls on the Plaza in the early ‘70’s. He then became a cab driver for Yellow Cab (Cabbie 1111). He retired after his heart attack in 2001. Sam never married.

Sam was a voracious reader. He enjoyed traveling to visit friends and relatives throughout the US. He made trips to London, England to visit his sister and sustain his passion for English literature. He was an avid collector of rare curios, but most of all, loved movies, with his most recent passion being Film Noir at the Kansas City Library.

Sam was very charitable, helping friends and acquaintances when he could make a difference in their lives. His achievements were personal rather than professional. He knew many people and more about Kansas City than most. Enhanced by his experiences as a cabbie, he had thousands of stories to tell – peppered with embellishments to keep us all interested. His family constantly encouraged him to become a writer, but he never took upon anything that wasn’t his own idea first. We will never know all of his good deeds or how much of each fantastic story was true. Kansas City has lost a great friend.

A memorial service will be held on Saturday, June 21 at the Cathedral of the Immaculate Conception, 416 W. 12th K.C, MO at 11:00 am. A reception for friends and family will follow at Tanners, 1000 Broadway. A family burial service will follow in the Lathrop Cemetery, Lathrop, MO. He signed his emails: “i am sam”