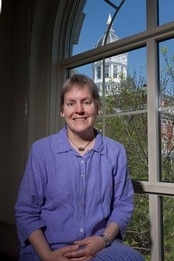 Sandra (Sandi) K. Abell died August 24, 2010, at her home in Columbia, Missouri. She lost her battle with ovarian cancer after a 4-year fight. She was 54 years old.
Abell was an internationally recognized scholar, who spearheaded the University of Missouri’s effort to build one of the nation’s leading K-12 science teaching and research centers. A Fellow of the American Association for the Advancement of Science, she also held similar positions with the Kellogg National Fellowship Program, the American Education Research Association and the National Science Teachers Association. Abell served as President of the National Association for Research in Science Teaching and won numerous awards for mentoring graduate students, teaching and scholarship.

In recognition of her efforts, the University of Missouri in 2006 named Abell to receive one of its highest honors as a Curator’s Professor. She was a member of the faculty in the Department of Learning, Teaching and Curriculum and the Division of Biological Sciences. She was a Visiting Scholar at Curtin University in Perth, Australia (1998), a consultant to the Institute for the Promotion of Science and Technology in Bangkok, Thailand (2002), and delivered keynotes to international conferences in Taiwan, Portugal, and The Netherlands. Her work took her to Puerto Rico, Italy, Sweden, Turkey, and Honduras, as a presenter and resource on strengthening K-12 science education.

“During this time when science education and research in that field play an increasingly critical role in our state’s and nation’s future, Dr. Sandra Abell has been an international leader,” MU Chancellor Brady Deaton said. “We are deeply saddened by the loss of such a distinguished scholar, teacher, and mentor and will honor her memory through increased efforts to enhance science education and outreach. I will always remember Sandi as a wonderful colleague with a kind, considerate spirit.”

After earning a bachelor’s degree in elementary education from the University of Iowa in 1977, she began her professional career as a 5th & 6th grade science and reading teacher in Norway, Iowa. In 1981, she earned a masters degree in talented and gifted education from the University of Northern Colorado in Greeley, Colorado.
Abell then served as the coordinator and teacher of the K-12 gifted and talented program for the Department of Defense Dependents Schools in Keflavik, Iceland. In 1982 she moved to Albuquerque, New Mexico to become a multicultural and gifted and talented teacher of K-5 students from 1982 to 1985.

After earning her doctorate in 1988 from the University of Iowa, Abell was named an assistant professor at Purdue University in West Lafayette, Indiana. While at Purdue, Abell was a consultant to the Allison Bixby Bilingual School in Zamarano, Honduras, where she established elementary science curriculum and a study-abroad program for Purdue elementary education students. She was promoted to full professor by Purdue.

In 2000, Abell became the director of the University of Missouri Science Education Center (MUSEC). Under her leadership, MUSEC increased the number of faculty positions in science education, built strong relationships among scientists and science educators, implemented the Office of Science Outreach, and increased the number of externally funded projects.
Abell was born in St. Louis, Mo., on Feb. 24, 1956. She attended Good Shepherd Catholic School and graduated from Incarnate Word Academy in 1973. As a 9-year-old, she planned and implemented a summer-time neighborhood pre-school. She advertised, organized activities, and charged 25 cents per child per day. As a teen, she worked for the City of St. Louis, supervising children in the Parks and Recreation Program. These early experiences foretold Abell’s future career as an educator.

Abell loved the mountains, family gatherings, board games and puzzles. She was an avid reader of fiction and a talented calligrapher and seamstress. She was known for her irreverent sense of humor, her single-mindedness, tenacity, and her willingness to advocate vigorously on behalf of children and their education.

Those wishing to express their sympathy in the form of a gift may donate to the Sandra K. Abell Scholarship. Funding from this scholarship will support a graduate student pursuing PhD studies in any science discipline who has demonstrated a dual passion for both research and teaching. Contributions to the Abell Scholarship to honor her memory can be sent to the University of Missouri, 109 Reynolds Alumni Center, Columbia, MO 65211.

A memorial service will be held at 2 p.m., Oct. 16, in the Reynolds Alumni Center on the University of Missouri campus.  The family asks that gifts be made to the Abell Scholarship or a charity supporting K-12 education in lieu of flowers.